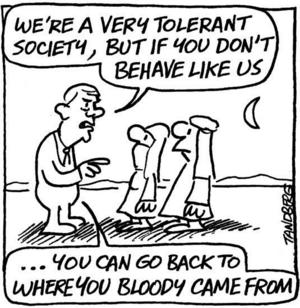 No matter how it crackles off the tongue. No matter how deeply inclusive it might feel at first. No matter how determined the struggle it reflects might seem. The construct of multiculturalism as it has been operationalized in our many social and intellectual spaces is at best faulty or unhelpful, and should therefore be abandoned immediately. I mean today!

Don’t get me wrong. It is clear to me that multiculturalism was once a good-intentioned response aimed at redressing the historic exclusion of non-whites, women, and other underrepresented groups from the dominant mainstream. Without the struggle that the multiculturalists portended, we may never have had the moments of Morrison in vogue, the first Black president, or the set aside pass-through funds to support diversity at historically White educational institutions and beyond.

Without the struggle of multiculturalism, indeed, I would not be in a place to have this conversation, as my very words would be shackled to some listless margins, open and empty like the three dimples tragically displaced on the edge of hole-punched loose-leaf paper. Marginality—that space driven to the boundaries of nowhere—has been American history’s passion, a crucifixion of equity draped on a cross of elite interests and borne of the throne-crowned hubris of ideological conceit condemning its manufactured audience to the shades of some unfairly casted main stage.

My complaint isn’t against the worthwhile struggle that multiculturalists have waged, but about the way it has been waged and, more importantly, how the term multiculturalism like “achievement gap,” “people of color,” “the other,” “minority,” and so on props up the very things that it struggles against.

In theory multiculturalism wants to mean something close to “many cultures” recognized together as one. It wants to provide a container that defines or summarizes both our common and uncommon yields to humanity while celebrating human cultural variably as normal. However, in practice, multiculturalism never really achieves this, does it? Instead, it gives us a category to name the excluded, grouping and, therefore, erasing the many significant and meaningful differences that excluded groups bear.

While each of these struggles is important, we do them little service by categorizing them as the same. By conflating very specific, very nuanced items of sociology and history, culture and politics, we move with heavy hands, surgically operating for change with the clumsy crafts of a hatchet as opposed to the greater precision of a scalpel.

In this light, multiculturalism means nothing because it has attempted to mean everything and, worse, everything that’s not White or male or elite or historically “included.” The term, itself, has done little to describe the needs of people that history has ignored, the silenced literatures that our universities have neglected, the local (as opposed to the universal) scripts that oppressed people are made outside their consent and under the penalty of violence to perform.

I want to make two points very clear. Multiculturalism has given us a category to name the excluded, grouping and therefore erasing the many significant and meaningful differences that excluded groups have among them. By constructing them as the same, the multiculturalist discourse discounts excluded groups equally.

As opposed to tearing down hierarchies of domination, the discourse on multiculturalism reimagines them. It gives the emperor a new closet while the empire persists. With multiculturalism, the conversation moves narrowly from topics of exclusion from the mainstream to topics of oppression or suppression within it. It is not a matter of better or worse because with or without multiculturalism things are bad. The question is, how do we get to better?

Indeed, because of the multicultural movement we have gained women’s studies, Black studies, Latino studies, Indigenous studies, ethnic studies, queer studies, and so on. Yet, as these items are bound by their labels, these very labels, labels that name history’s exclusion of us, surrender “multicultural” studies as something exclusive (i.e., marginal) in the academy. That is, such labels indicate marginality de facto because labels by their very nature are placed, not in centers, but against margins.

This is the issue: Inclusion does not mean a “for Blacks only” table while all the other tables in the room are reserved for Whites. It does not mean maintaining the status quo by passively, in some slick ass Orwellian way, offering discursive crumbs to the oppressed as a means of pacifying their deep hunger for change or appeasing their complaints. It does not mean purchasing cheap intellectual real estate, a kind of academic Guantanamo Bay, where non-dominant groups are forced together into institutional ghettos that blur lines that mark their distinct histories. What it does mean is that we are yet to attain the change for which we have so long struggled.

For change to come, we need new terminology. By this, I am suggesting that we need a new movement—a movement for true and transformative inclusion. In the past, the term human sufficed. It meant that we were all God’s creations, necessarily equal by virtue of this common endowment. Then instead of multicultural studies, how about human studies, where the subjects of investigation exist equally, but where the topics of our scrutiny gain their own measured appreciation, their own topical real estate and nomenclature in the vast space of our collective culture.

5 thoughts on “Beyond Multiculturalism”